The Murray Homestead in Raharney was said to be on Puddin’ Row. Although there is no mention of such a place in local newspapers of the time, a small sign was temporarily erected along the ancient pathway in the 2010s that referred to the spot as Puddin’ Lane.

Descendants of the Murrays who visited Raharney in early 1980, more than 4 decades after Christopher J. Murray died, say that a dilapidated house was still present at the location. It is likely that such a ruin would’ve been cleaned up at the very latest by the mid-1990s when the villages of Raharney, Killucan, and Rathwire engaged in a joint cleaning and restoration project to remove ruined structures and beautify their lands. Today, the former Murray land area is mostly unkempt grass and bush and stands out because lands on all other sides of it are well landscaped.

The Puddin’ Row name was probably derived from a narrow and crowded business and residential strip in Dublin that was referred to as Pudding Row that existed from as early as the 1620s to the late 1780s. Pudding Row in Dublin in the 1760s was said to be a crowded compact space for many merchants that included a shoemaker, trunkmaker, fruiterer and more.

In 1896 at a New York City gathering of former Raharney residents, one Patrick Flanagan performed for the crowd a number that was said to be his favorite song and dance. He called it “Pudden Row.” The Flanagans lived close by to the Murrays.

From 1937-1939, Ireland initiated a nationwide program to aggregate and preserve local folklore. This included collecting oral history from local residents all over the country.

Approximately 333 pages worth of handwritten entries were collected from aging Raharney residents between 1937-1938. Two entries refer to the historical existence of a Pudden Row and yet another to a Pudden Street. One resident even claimed to still be a resident of Pudden Row at that time. The best entry, however, is one submitted by an anonymous resident in 1937 who carefully names each road in Raharney, describes where the roads lead to, and labels the condition of the roads. There, the author describes Pudding Roe as a “boreen,” the Irish word for narrow country road.

A man lived in Pudden Row named Cooney. One day he cut a lone bush and cutting it up in his own yard some one told him to leave it back. He never minded when he went out the next morning it was gone. He went to the place where he cut it and it was growing as before in about two months afterwards the man was found dead in his own house.

In the year of the famine there were four houses in Pudden Row, Raharney. There are none of them standing now. In one house there lived ten young fellows and when the Relief work came they were sent for to come to work at the river but they were all found dead with hunger and disease.

Dublin Road was formerly known as Pudden’ St. Many people call it by that yet.

From the village of Raharney there are six roads which lead to different places. 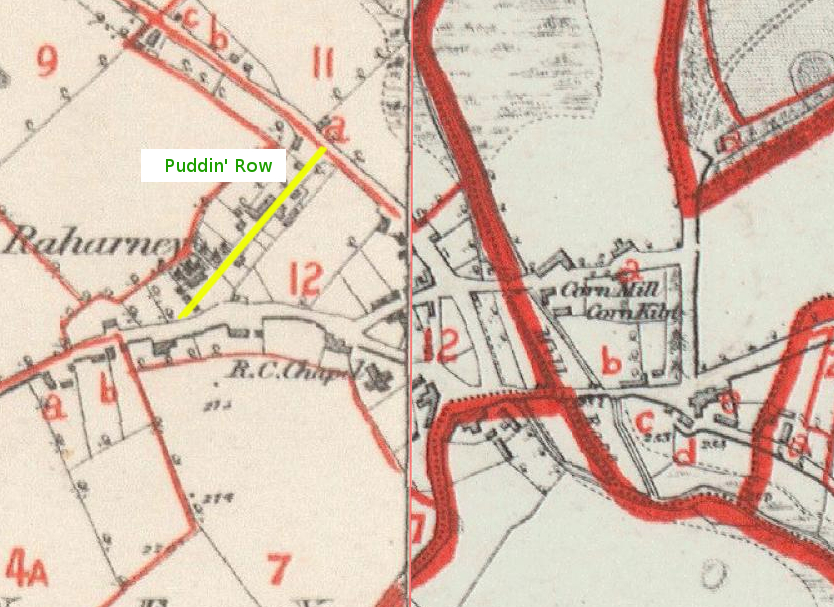 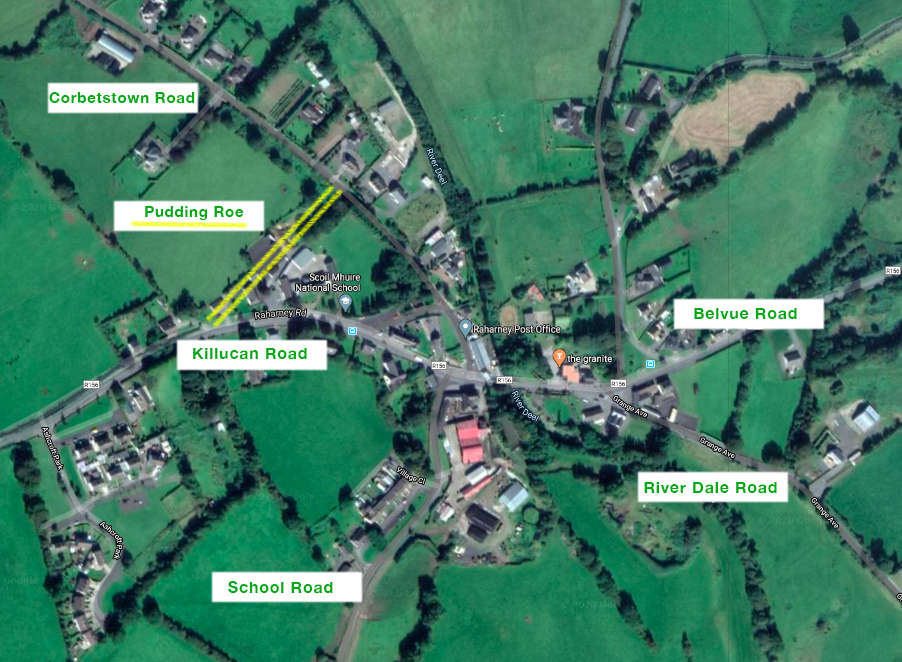 The Griffith’s “Primary Valuation” land Survey conducted in around 1855, confirmed that in plot #12 of Raharney, where Puddin’ Row is believed to be situated, there lived a Patrick Murray and a Matthew Murray.

1. Patrick Murray was the name of Timothy Murray’s father

2. Patrick Murray was the name of Timothy Murrays’ brother

3. Matthew Murray was the name of Timothy Murray’s brother

Ireland’s Folklore collection initiative also managed to scoop up an entry by an anonymous author from Raharney in 1937 that said a house that once belonged to Patrick Murray on Corbetstown Road had become a ruin. This author says that Patrick was said to be a Cobbler (Shoe repairman). Timothy’s brother, Patrick Murray, meanwhile was a shoemaker. It’s close. It’s unknown what his father Patrick did. Corbetstown Road intersects with Puddin’ Row. Patrick of Corbetstown Road is said to have died of a stroke while playing cards.

Plot #12, referred to in the survey as the “Village of Raharney” and which is believed to have encompassed Puddin’ Row, contained 27 houses in 1855.

The extended Murray clan lived across 3 homes there in 1901.

According to the March 1901 census, five of Christopher J. Murray’s siblings still lived in a house together (House #21). Christina Murray, as the oldest, was designated as the Head of Household. With her lived Patrick, Michael, Mary, and James. By 1911, the only remaining resident of the house was Patrick Murray because James and Mary had moved to America, Michael died in 1908 and Christina got married to Nicholas Farrell. Patrick died in 1930 and ownership of that home is said to have passed on to Christopher J. Murray.

Two other branches of the Murrays continued to live in Raharney as well, in houses #5 and #9.